The pigs are gone!  Or rather, the pigs are in the freezer!  This is quite a relief as, with the cooler weather and shorter days, the pasture isn't growing as well as it was.  And that means it was becoming increasingly impossible to prevent the pigs from turning the pasture into one gigantic mud hole.  One of the great things about buying meat by the whole animal (or raising your own) is that you get all the extra weird parts of the animal, many of which are really quite good.  Case in point: lard.

Our butcher isn't accustomed to people asking for all the fat off their pig back, but they did remember to bag it up for me (even if I did have to make a second trip, as they left it in the freezer the first go around).  This is the amount we got back from two year old American Guinea Hogs. 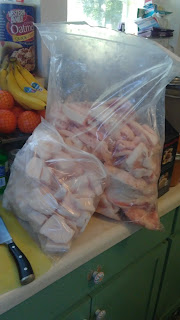 This is the back fat (fat from off of the pig's topline) and leaf lard (fat from around the pig's kidneys) mixed together, because I forgot to ask them to separate it out.  If you remember, it's nice to have the leaf lard separate, as it is rather different.  It's softer and less likely to have a pork smell/taste, and therefor nicer for things like pastries.

You can see it's in pretty big chunks - which is fine.  You are going to have to either cut it into small pieces (like about one inch cubes), or run it through a meat grinder.  I use the coarse disk on mine, and it's very helpful because then I only have to cut it small enough to fit in the meat grinder. 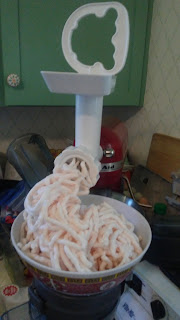 All that mess goes in the crock pot with a quarter cup of water.  The water keeps the fat from burning until some fat liquefies, and will cook off. 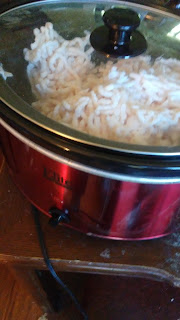 Set the crock pot low, and come by and stir every now and again.  As the fat comes to the surface, you can ladle it off and strain it through a large handkerchief.  The trick is to filter off all of the fat before the solid bits (cracklings) turn brown.  If you wait until it's all brown, you will get more lard, but the fat will be brownish and smell like bacon.  But if you get it all out while the solids are still soft and whitish, the fat will be white and odorless. 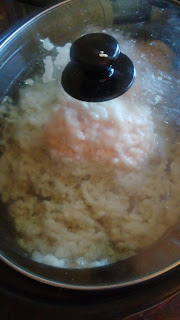 Out of all that fat, we got two gallons and a quart of lovely white lard.  Fabulous for making biscuits and all sorts of pastry, as well as for frying.  Of course... isn't lard bad for you? 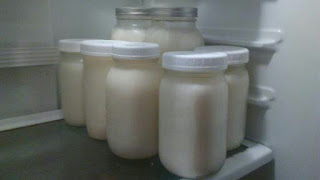 KIND OF!  Of course too much fat isn't good for you.  But the difference between this fat and the lard you buy at the store is twofold.  First, the store lard is hydrogenated.  That stuff is BAD for you.  Of course it does have better shelf life, so keep the home rendered stuff in the refrigerator.  The second difference is what the pigs were eating.  Store pigs are raised in confinement (unless you purposefully buy pastured pork) and don't get to eat things like grass or do things like lie in the sun.  My pigs did that ALL THE TIME.  So lard from pastured pigs is actually a pretty good source of fat soluble vitamins, including Vitamin D.  There's also a bunch of science about how pastured pigs have different kinds of fatty acids than confinement pigs and that makes it better, but every time I turn around it seems they've decided a new kind of fat is THE healthy fat so I don't pay too much attention to that.  Too complicated.  The point is that you shouldn't be afraid of a little lard as long as it comes from pasture raised pigs, and isn't hydrogenated.  Also: it's delicious!